Publication of the 2019 French-American Economic Report

The Economic Department of the Embassy of France in the United States has published the 2019 edition of the France-United States Economic Report.

This report presents the strong and balanced ties between France and the United States through economic data (trade, employment, foreign direct investment) and confirms the trends outlined in the previous edition. French-American bilateral relations represented a trade volume of $129 billion in 2018, an increase of 7% compared with the previous year. More than $400 billion in reciprocal investment was also generated between our two countries last year. 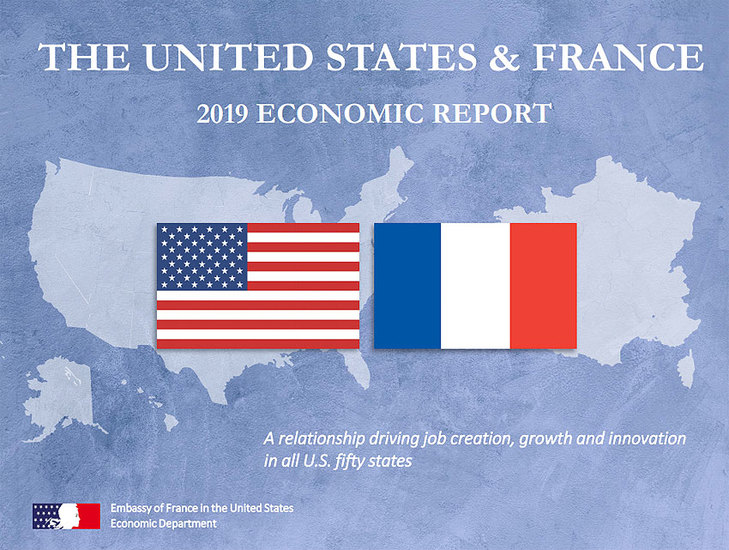 France is the third largest foreign employer in the country, with almost 730,000 direct jobs created by almost 4,800 subsidiaries of French firms established in the United States, while in return almost 500,000 jobs are generated by 4,500 subsidiaries of American firms in France. The aerospace industry is a perfect illustration of this strong economic relationship, with a dynamic trans-Atlantic value chain benefiting the economy of both countries.

This report presents, for each state, the key figures for our bilateral relations in 2018 and highlights a sample of locally established French companies. It demonstrates, through 40 or so testimonials from French firms established in the United States, the strength of this economic partnership.

For this third edition, several American political and economic figures were invited to bear witness to the importance of the value and employment generated by French-American trade.

Access the full version of the 2019 France-United States Economic Report HERE. Access information by state by clicking on each icon on the map HERE.