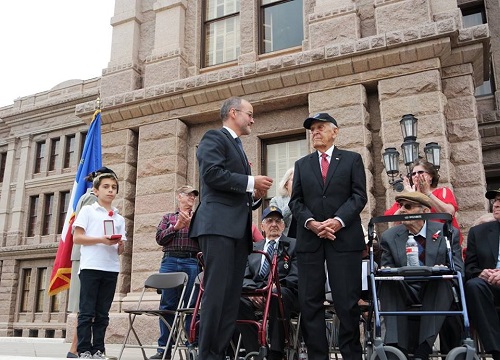 Ernest Lacroix was inducted into the French Legion of Honor on November 11, 2017

Ernest LACROIX (First Lieutenant) from Fort Worth, TX was born February 22, 1919 and volunteered to enlist in the US Army on March 1, 1941 where he was assigned to the 101st Infantry. He later enlisted in the Air Corps then Flight School, finally earning his wings on January 14, 1943. 1st Lt. Lacroix served as a B-25 pilot and leader of the 310 Bombardment Group. By the summer of 1944 he was leading the entire 310th Bomb Group. Based on the Island of Corsica, he flew 76 combat missions in his B-25, the “Smoky’s Posse” over Italy and Southern France. On one particularly notable Nickeling mission he found himself nose to nose with a ME109 German fighter but managed to make a pass without any damage to the flight. For his service during the war, he has been honored with the EAME Campaign Ribbon with 3 stars, the WWII Victory Ribbon, an Air Medal with 6 oak leaf clusters, and the Distinguished Flying Cross.

After finishing his combat flying, he was sent to the General Dynamics Aircraft Plant in Fort Worth, Texas where he flew the then new B-32 bombers for 4 months before leaving the military. 1st Lt. Lacroix spent his civilian career in the printing business before retiring at the age of 70. He and his late wife were married for 69 years and have 3 children (2 daughters and a son), 7 grandchildren, and 7 great-grandchildren.