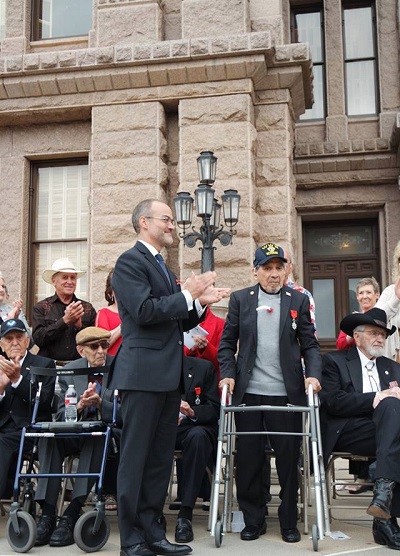 Bernardino Villaseñor was inducted into the French Legion of Honor on November 11, 2017

Bernardino VILLASEÑOR (Private 1st class) from San Antonio, TX was born May 24, 1924 and enlisted in the US Army on April 1, 1943 at the tender age of 19 where he served as a Medic-Aidman under General Patton until 1945. As a trained medic and mustard gas specialist, his efforts helped save the lives of many wounded soldiers who were ultimately sent to the UK and U.S. for further treatment. During the liberation of France, his detachment landed on Utah beach during the invasion of Normandy, serving just behind the front lines and he can vividly recall marching through Paris, passing under the Eiffel Tower and Arc de Triomphe. Pte Villasenor’s detachment was responsible for the liberation of Buchenwald Concentration Camp where he was one of the first on site to offer care to the sick and wounded. He has received multiple honors for his service, including the European African Middle Eastern Theater Ribbon with Three Bronze Stars, the American Theater Ribbon, Good Conduct Medal, and WWII Victory Medal.