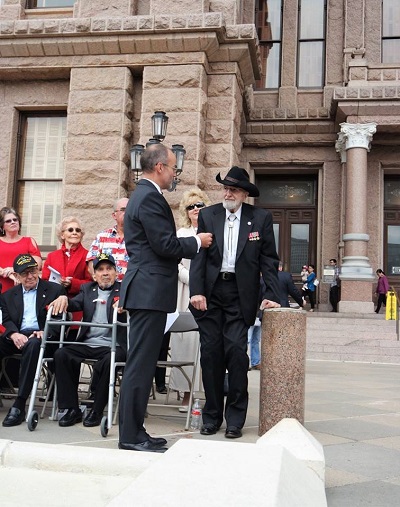 Norris Waddill was inducted into the French Legion of Honor on November 11, 2017

Norris WADDILL (Sergeant) from Euless, TX was born December 21, 1922 and enlisted in the US Army on February 8, 1943 at the age of 21 and was assigned to the 3rd Battalion of the 291st Infantry Division as a Messenger Dispatcher. He landed on Omaha beach under heavy fire in the first vehicular wave early on D-day, and from D-Day in June of 1944 to VE day in May of 1945 he drove over 29,000 miles in blackout conditions to deliver messages under General Gerow for General Charles De Gaulle and British Field Marshal Bernard Montgomery during the Normandy, Norther France, Rineland, Central Europe, and Ardennes campaigns.

During one memorable mission he was asked to memorize aerial photographs and drive 90 miles in pitch black darkness to deliver a message that lead to the fall of a German General. Throughout the war he was instrumental in establishing a direct connection between the Americans, the British, and the Free French forces. For his actions, he was commended with the Bronze Arrowhead and a Bronze star, among others.

After the war, he returned to Texas and started a long and successful career in the oil fields of West Texas, retiring in 2008 at the age of 86. He married twice, losing both wives to cancer, and have a daughter, Nancy, and three grandsons; Stephen and his wife Christine, Johnathan, and David. He now lives with Nancy and her husband Charles in Fort Worth. Since retiring, and with the help of his daughter, he has written a book for his grandson’s so they would know what their grandfather and others went through, it is called “Shooting from the Hip – They Called Me Tex in World War II.” Mr. Waddill rode in Saturday’s parade in a refurbished Jeep identical (down to the registration numbers) to the one he drove in during the war.