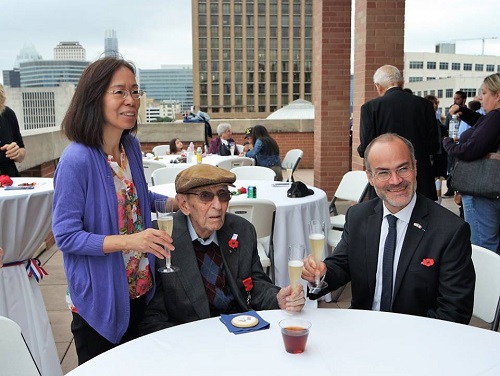 Franklin Luttrell was inducted into the French Legion of Honor on November 11, 2017

In 1940 After finishing his first year of college he joined the Army in 1940 where he started out in Army Artillery with the 203rd Anti-aircraft Regiment. His first post after training was to protect Los Angeles after the bombing of Pearl Harbor. After a short time he was assigned to the Army Signal Corp and sent to England. From there he went on to serve as a radio repairman under the 208th Signal Depot Company in northern France, Rhineland, and Normandy where he landed on Omaha Beach the day after D Day.

Soon after the end of the war he joined the US Air Force and served for another 17 years, retiring in 1966. For his service during WWII, he were awarded the EAME Campaign Ribbon with 3 bronze stars, the Asia Pacific Theater Campaign Medal, the Good Conduct Medal, and the American Defense Service Medal.

After his military service, he went to work for Ling-Temco-Vought where he helped develop new gadgets, then in the 70s he moved on to sell insurance and annuity until he were 90! He now live in Arlington, Texas and have 2 children, 2 grandchildren, and 4 great grandchildren.